Fourteen children at a Long Island park were left injured after an inflatable bounce house suddenly collapsed on them at an end-of-the school-year field trip.

One of the kids, who were all ages six and seven, suffered a broken leg from Tuesday’s incident at Wyandanch Park in the hamlet of Wyandanch, New York.

The Wyandanch School District hosted the party for the elementary school students, according to Suffolk County Police.

It did not end well for four other children as they had to be taken to hospital. Most injuries sustained from the incident, however, were minor.

It remains unclear if the bounce slide was installed properly or if weather conditions played a factor into the collapse.

Several children out of of the 14 that were on the massive inflatable slide at the time that it collapsed were thrown into the air and landed on hard-surfaced tennis courts in the surrounding area, according to a witness.

‘He flew like 15 feet up in the air and landed right by the gate there,’ Stacey Brown told CBS New York. ‘I’m just praying they are all OK, especially that young man that flew up … scared, they’re all terrified.’ 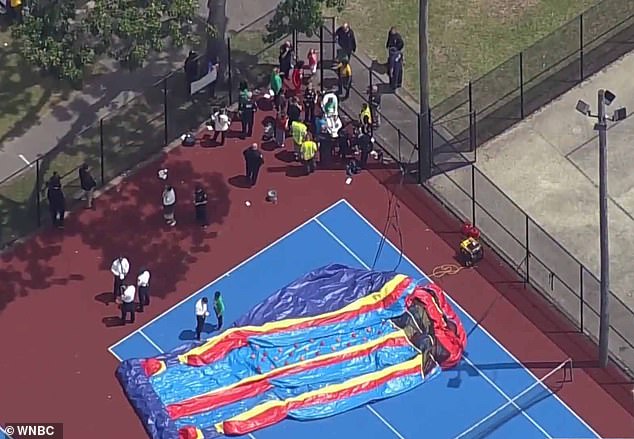 An inflatable slide that also had a rock-climbing wall collapsed at an end of school year event in Wyandanch, Long Island, New York on Tuesday 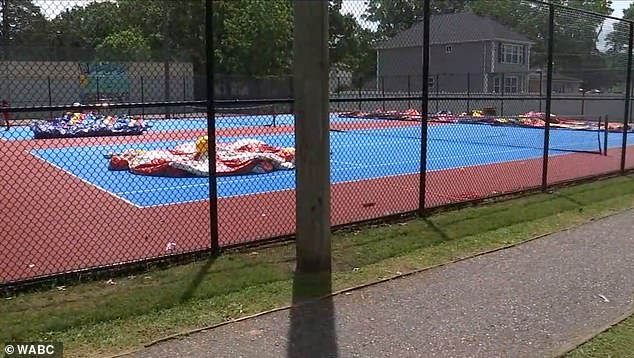 More than a dozen of children were injured from the collapse, with one child breaking his leg 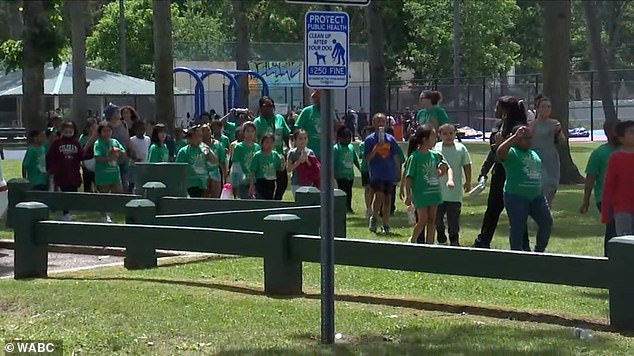 Another parent said she was horrified when she saw the children in mid-air, ABC 7 reported.

‘The bounce house lifted up, and when it lifted up, you saw him go over first, another little girl holding on for dear life,’ said the unidentified parent, who remained anonymous. ‘It was horrible.’

The children who attended the field trip were either from Martin Luther King or Lafrancis Hardiman Elementary schools.

The bounce house, which had a large slide on one side and a rock climbing wall on the other, was overflowing with students at the time of its collapse, one child said.

‘There was too much people in the bouncy house, and then the thing fell over,’ a 7-year-old named Jayson told ABC7. ‘And some people got hurt, and they went to the hospital. … Some of them fall on me, and some of them did not.’

Another mother revealed that her daughter suffered an injury from the incident. She also saw another child with a more severe injury.

‘When I seen that child go from the sky up, fell to the gate, and that’s where he landed,’ she said. ‘You heard it when he hit his head. It was horrible.’

A witness who was in the area with his two children, one in second grade and one in Pre-K, said he saw the incident unfold itself.

‘When it fell it over, it came over like a big tree just tumbled over, kids falling off, it was ridiculous,’ Lamont Brown told ABC 7. ‘My daughter was leaving because she decided that she didn’t want to get on the bouncy house. There was just too many people, so we were walking away when it went over. We seen it blow over as we were walking away, so thank God she didn’t get on.’

In the aftermath of the incident, several parents said the bounce house wasn’t properly secured.

However, Jacob Khoury, who is a manager at Jump Around Party Rental in Huntington, pushed back those claims and said that the slide was inflated and secured without any issues.

‘The bounce house was secured properly,’ he said. ‘I was here to install it this morning myself.’

He added that the school district had not chosen to hire an attendant, meaning that it was the responsibility of school officials to watch the kids.

The Wyandanch School District started its own investigation into what happened. DailyMail.com has reached out to the school district for comment.

‘We recognize this is a very scary event witnessed by our young scholars, staff, and families, and we are deeply concerned about how this could have happened,’ Wyandanch Union Free School District Superintendent Dr. Gina Talbert said.

‘The district has immediately initiated a thorough investigation, including working with the company who provided the inflatables, into the cause of this situation. We will provide more information as available.’

‘At this time, our priority is the health and well-being of the students who may have been injured and those students who attended the event,’ she added. 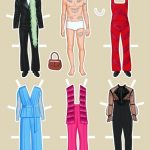 Next Article Technology is shaping learning in higher education

With help from Eli Okun and Garrett Ross If Alex Holder’s memory is accurate, Donald Trump was on the phone with Vladimir Putin just minutes […]

Rosenthal: For the Padres, the future is now. Breaking down the MLB trade deadline

Padres fans hated the line. Padres officials hated it, too. So consider this a pre-emptive strike to spare @OldTakesExposed from crashing when members of both […]

Boudin was elected in 2019 during a very different moment in American politics, as concern over police accountability was rising. Calls to reform the criminal […]

— Recommendations are independently chosen by Reviewed’s editors. Purchases you make through our links may earn us a commission. Amazon Prime Day has come and […]