A second person wanted in connection with a deadly mass shooting in Philadelphia has been apprehended, officials said Monday.

Rashaan Vereen, 34, was arrested at around 7:30 p. m. Monday without incident in Philadelphia, the U.S. Marshals Service said.

Three people died and 12 others were injured after gunfire erupted in Philadelphia’s bustling South Street entertainment district late Saturday, officials said. Eleven of the injured were shot, and one was struck by shattered glass, police have said.

The first person taken into custody, shortly after the shooting, was identified at a news conference Monday as Quran Garner.

A fight preceded the gunfire, which occurred around 11:30 p.m., officials said.

Two of the men pulled out guns during the fight and fired at each other, Pescatore said.

Garner, a friend of the second man who fired, then himself started shooting down South Street toward where the fight had begun, she said. A police officer fired at Garner and shot him in the hand.

Garner was at a hospital Monday, Pescatore said. It was not immediately clear whether he had an attorney who could speak on his behalf.

Both Jackson and the man from the fight who returned fire had permits to carry guns, she said.

No charges will be filed against the man who survived the shooting. He was wounded and was in serious condition at a hospital Monday, she said.

Police Commissioner Danielle Outlaw said there is still more work to do.

“The PPD will continue to work with all of our law enforcement and community partners to identify and apprehend each and every individual responsible for these heinous crimes,” Outlaw said in a statement announcing the second arrest.

Phil Helsel is a reporter for NBC News. 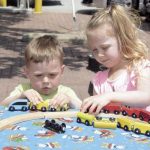 Americans remembered 9/11 on Sunday with tear-choked tributes, and pleas to “never forget,” 21 years after the deadliest terror attack on U.S. soil. Bonita Mentis […]

Islamic Jihad said in a statement one of its senior leaders, Tayseer Al Jabari, had been killed in an Israeli strike. He was a commander […]