PLANTATION (CBSMiami) – Grieving family and friends of 17-year-old Aden Perry gathered on Monday to honor the young South Florida hero’s heart and spirit after he died trying to save another teen who crashed his car into a Sunrise lake.

Aden’s funeral was held at Plantation Baptist Church where loved ones gathered to celebrate his life.

“I love you more than words can express. I miss you with my whole heart and being,” said Aden’s mom, Sarah Perry.

Sarah was with her son the night he died on April 19th in the Residences of Sawgrass Mills neighborhood along NW 12th Avenue near Silver Palm Boulevard, just north of I-595.

“I want you all to know his last walk with me was a good one,” said Sarah.

Mom, joined by Aden’s dad and stepmom, shared that this last month was the happiest their son has ever been in his life.

“He was a joyful kid and impacted a lot of people,” said Alan Perry, Aden’s dad.

Family, surrounded by loved ones, uplifted through prayerful songs in the church meant to comfort the soul as they grieve.

The family placed items of significance on his closed casket. A stethoscope, for one day, he hoped to become a neurosurgeon. The bible and an academic achievement award.

The 17-year-old was light to those around him. “Aden’s choices replicate love, compassion, and a heart for others,” said Erin Perry, Aden’s stepmom. 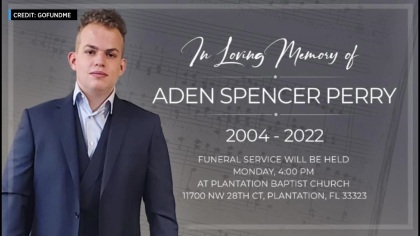 Aden Perry, the good Samaritan who died trying to save Venkata Krishnamurthy when his car crashed into a lake. (Credit: GoFundMe)

“Aden was my hero every day, not because of his last act,” said Sara.

Aden’s dad shared details of how his son died. Aden and his mom saw a vehicle crash into the water in the Residences of the Sawgrass Mills neighborhood. Without hesitation, Aden jumped into action. Tragically, as he dove in to rescue a fellow teenager, his head hit a rock underwater. His dad said he did not suffer.

“Knowing I couldn’t help my son will haunt me forever,” added Sarah.

A community mourned the loss of its hero, best friend, brother, and son.

“Some of us live 100 years and will not experience what Aden experienced in those 17 years,” said Alan.

“My mom will take care of you as you wait for me to come home. I love you. Thank you for being my son. You made me the proudest mom,” said Sarah.

Sarah shared with the church how she goes to the same lake where she lost her son every night. She goes there to talk to him. Adding, he was so full of life and good intentions.

He was trying to rescue fellow teenager, Venkata Sai Krishnamurthy, who lost control of his car and crashed into a lake.

Tragically, both teens died that night.

Aden’s father was a former chief with Miami-Dade Fire Rescue and had his father’s selfless spirit.

His family is also setting up a scholarship in his honor to help others pursuing educational paths in medicine and science.

In a statement to CBS4, Perry’s family said, “It is difficult to find words to express the deep pain and sorrow we feel after losing our son Aden Perry. However, we are absolutely touched and moved by the outpouring of love and support from family, friends, and the community who have reached out to express their condolences. Although Aden’s life ended before we were ready, the time that he spent in our lives was memorable and we will be forever privileged to have had him for as long as we did.”

“Our son made an impact in this world from the day he was born until the last minutes of his life. He came into this world early and left the same way, but it was everything that he did in between that will forever leave an impact on everyone he touched. His quiet demeanor allowed his actions to speak louder than his words. He was caring, selfless, and determined to make a difference, and that he did. Growing up in a family of service was a perfect fit for Aden, as his desire to help people was in his blood. Aden excelled academically at Western High School and was set to graduate at the top of his class. His academic achievements in math and science were a perfect path to reach his goal of becoming a neurosurgeon, a career where he hoped to help so many. We are devastated by this loss, but we find solace in knowing that Aden’s last action was the most selfless act anyone could ever do. Running towards danger while risking your own life is truly the definition of a hero, and that is exactly what he demonstrated to be. There is no question that Aden knew that, and as difficult as it may be to understand, we know he did the right thing.”

“We are mourning the loss of our son, but we’d like to also extend our condolences to the family of the other young man who also lost his life. A tragic set of events where two young lives converged in the oddest of circumstances, leaving two families in deep pain and sorrow. However, we are grateful and so proud to know that his last selfless act will allow Aden to continue being a hero and sharing his kindness with others in need of education or help. The Aden Perry Good Samaritan and a Scholarship fund has been established in his honor to keep his memory alive by providing educational support to students interested in medicine or science.”

Aden was a junior at Western High School.

Krishnamurthy was a senior at Marjory Stoneman Douglas High School. 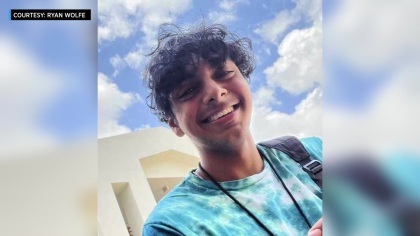 Members of his family gathered on Sunday to celebrate his life in a memorial near the lake where the crash took place.

Police say he was driving in an area he was unfamiliar with and lost control of his car.

A family friend told CBS4 News Venkata was on the phone with his father when he crashed into the water.

Venkata, known lovingly as ‘Sai,’ had plans to attend Nova University in the fall on a scholarship.

There is also a scholarship being set up in his name for excellence in basketball, which was his passion.

Teammates are creating a “Play for Sai” scholarship fund to help those in low-income communities.

Previous Article Deputies use tourniquet to save man after motorcycle crash

Summary The Guardian’s live coverage of nationwide abortion rallies as come to an end. Here’s a look at how the protests unfolded throughout the day. […]

FRANKLIN, TN (WSMV) – Two Franklin Police officers suffered injuries after being dragged behind a car when the suspect of a traffic stop fled the […]