Former U.S. Women’s National Team soccer star Hope Solo has asked the National Soccer Hall of Fame to postpone her induction ceremony to 2023, saying that she will be voluntarily entering an in-patient alcohol treatment program and is focused solely on her health and family.

In a note shared to Twitter on Friday, Solo wrote that she has “contacted the Hall of Fame and respectfully requested a postponement of my Hall of Fame induction ceremony to 2023.”

“I will be voluntarily entering an in-patient alcohol treatment program to address my challenges with alcohol. At this time, my energies and focus are totally directed to my health, healing and taking care of my family,” she added. “I want to thank the Hall of Fame for their support and for understanding my decision.”

The news comes less than a month after Solo, 40, was arrested in a North Carolina parking lot and charged with impaired driving, resisting arrest and misdemeanor child abuse. Police did not specify how Solo was allegedly impaired, but said her two children were in the vehicle with her at the time of her arrest. Her attorney said at the time that “the story is more sympathetic than the initial charges suggest.”

Solo was scheduled to be inducted into the Soccer Hall of Fame on May 21 in Frisco, Texas, as part of the Hall’s 2022 class. The organization has accepted her deferment.

“The NSHOF fully supports her decision and looks forward to honoring her and her historic achievements at next year’s induction ceremony,” the organization’s executive director said Friday. 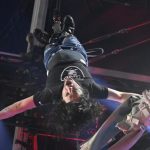