South End voters are not divided by race, but recent trendlines are

There have been massive shifts in how People of Color vote in the past five to six years across the country — especially Asian and Latino voters. In this piece, I will dive into the political behavior and patterns of Communities of Color in South Seattle. I will showcase how Communities of Color in the South End vote and how our vote has evolved since the 2016 elections. I will tap into how the South End fits into our statewide politics as well as our city politics. And finally, I will show how gentrification has played a role in city political trends.

The 37th Legislative District — which spans South Seattle, the Central District, Skyway, and the Chinatown-International District — is the most Black and Asian American/Pacific Islander legislative district in Washington State. It is also one of the most non-white districts in the state. However, the demographics of the 37th Legislative District are changing due to gentrification. The district became 3% more white since the 2010 Census (while Seattle as a whole became over 5% less white), with voting precincts that have more People of Color (especially near Rainier Beach) growing whiter at the fastest rates.

The 2020 redistricting cycle changed very little about the 37th LD’s composition, with the only changes being that Beacon Hill was fully united in the 37th, and downtown Renton was moved from the 37th to the 11th district.

Voter turnout in the 37th Legislative District is lower than most other Seattle-based legislative districts. And within the South End itself, voter turnout is heavily unequal.

Racially polarized voting is when white voters and Black voters (or Latino, Asian, Native, or broadly voters of color) have distinct different candidates of choice. For example, Black voters in Alabama almost always vote for Democrats whereas white Alabamans vote for Republicans. Racially polarized voting is an important requirement in Voting Rights Act redistricting lawsuits that determine majority-POC districts and racial representation. When looking at those statistics in South Seattle, we find that there is actually very little racially polarized voting in typical Democrat versus Republican races. This is because the district is very Democratic in all corners and communities: White voters and BIPOC voters are all overwhelmingly Democratic in Seattle.

However, there have been some racial disparities in how the vote is changing since the 2016 election. Precincts with many People of Color have shifted slightly towards the Republican Party since 2016 while most majority-white precincts have not changed at all or have gotten even bluer since 2016 in both presidential and U.S. Senate elections. This follows national trends of Republican gains among People of Color, particularly non-college-educated People of Color. As Democrats have made gains among college-educated voters, Republicans have made gains among non-college-educated voters since 2008. These trends used to only exist within white voters, but recently this educational divide has extended to non-white voters: As Democrats become the party of college-educated voters, working-class people (white and, now, non-white) are slowly drifting away from Democrats, including in working-class South Seattle neighborhoods.

While People of Color have drifted towards the Republican Party in general elections, they have also shifted more in favor of progressive Democratic primary presidential candidates like Bernie Sanders and Elizabeth Warren since 2016. While there is still no significant racial polarization between more moderate candidates like Hillary Clinton and Joe Biden compared to progressive Sanders and Warren, there is a clear statistical indication that voters of color are trending towards progressive Democrats over moderate Democrats to a degree much greater than that of white voters in the South End (r2=0.25). A part of this is explained by the Sanders campaign’s greater focus on BIPOC voters in 2020. However, this follows the same trends of class divisions that have pulled working-class voters away from traditional Democrats who increasingly represent the college-educated — just further left. In short, voters of color in Seattle and nationally are moving away from the center towards both the left and the right.

There is also little correlation between how diverse a precinct is and how they vote in Seattle city elections, specifically in progressive versus moderate Democratic races. White and non-white voters vote for progressive and moderate candidates at similar rates within South Seattle. This changes when looking at the whole city, however, where diverse precincts vote more progressive holistically. Put otherwise, the South End collectively is a lot more progressive than the rest of Seattle in city elections.

While there is little racial polarization in city elections, there are signs that other factors correlate to how South End voters vote in city elections. In particular, precincts with lower median income and increased gentrification (the increase in white population since 2010) back progressives over moderates. Conversely, South End precincts that have been getting more diverse vote more moderate; these types of precincts are typically historically white, high-income waterfront precincts along Lake Washington. It’s not racial demographics itself, but change in racial demographics and income that indicates a neighborhood’s progressiveness.

Finally, the 2021 mayoral election and 2021 City Council Position 9 results side-by-side show how candidate quality matters. While heavily-BIPOC Rainier Beach and Beacon Hill voters marginally went for Bruce Harrell (a moderate) in the mayor’s race, these neighborhoods voted overwhelmingly for Nikkita Oliver (a progressive) in the City Council Position 9 race even as the rest of the city voted for the moderate (and progressive) candidate at the same rate in each race. Both Harrell and Oliver are candidates of color from the South End who had opponents from other parts of the city. The disparities in these results show that who the candidate is beyond their ideology matters more to South End voters compared to the rest of the city: South End BIPOC voters want representatives from their community.

While there is little racial polarization in most state legislative races and Seattle city races, there was significant racial polarization in this year’s 37th LD House Position 2 race between Chipalo Street and Emijah Smith. To the top-right is a map of Street and Smith head-to-head after their primary election results. Street did well in the whiter, northern parts of the district while Smith did well in the southern, more BIPOC parts of the district. Correlational studies also show that there was a clear correlation (r^2=0.405) between precincts with more People of Color and precincts that supported Emijah Smith. This correlation is more salient particularly with Black voters compared to Asian voters. Given Smith’s long history of advocacy in BIPOC communities in contrast to Street’s many newspaper endorsements, this makes sense: White voters likely put more weight on paper endorsements while longtime BIPOC voters are more familiar with generational community leaders like Smith. This follows trends seen in 2021’s mayoral and city council races: White voters value political ideology comparatively while South End BIPOC voters — especially Black voters — care about a candidate’s connection to their community.

The clearest finding, statistically, from these analyses is that People of Color in the South End continue to be systematically excluded from our electoral process. Voter turnout rates among BIPOC neighborhoods are the lowest in the district. So while the majority of residents in the 37th district are indeed People of Color, the disparate voter turnout means that those who actually vote are majority white people. To fix this, we need continued and improved community-based outreach and education to People of Color in our schools. Further, we need intersectional efforts to increase translation services, civic education, childcare, social services, and remove many more barriers that prevent People of Color from voting.

Additionally, we need to continue to push for more majority-BIPOC districts by eligible voters (citizen-voting-age population) in our federal, state, and local jurisdictions. Because of racially disparate voter turnout patterns and the fact that People of Color are disproportionately ineligible to vote (being non-citizens and/or under 18 years old), having a simple 51% POC district almost certainly does not mean the majority of votes are from People of Color. We need redistricting for racial justice that ensures BIPOC communities can actually elect candidates of choice, which involves more statistical work than simply looking at a demographic table. Redistricting Justice for Washington spearheaded these efforts in the 2020 redistricting cycle, but we need to further that education and advocacy in communities in the future.

Furthermore, both the federal and Washington Voting Rights Act does not guarantee Communities of Color a majority-BIPOC district if there is no pattern of partisan political polarization by racial lines. These analyses are typically conducted by measuring polarization in Democrat versus Republican races, but South Seattle does not have racial polarization in Democrat versus Republican races. But, there is still racially polarized voting in the South End — just between Democrats, like Emijah Smith and Chipalo Street. Nonetheless, the Voting Rights Act allows South End voters of color to legally be gerrymandered apart and prevented from electing their candidates of choice.

Looking Ahead to November 2022

The 2022 election will be key to figuring out whether these recent trends among People of Color were a Trump-era fluke or the start of a greater trend among People of Color away from the traditional Democratic Party. Locally, Democrats’ performance in statewide races as well as in legislative races will give insights on whether Washington State and South Seattle will follow those trends.

The result of the state house race to fill Rep. Kirsten Harris-Talley’s State House seat will help shed light on whether voters of color (who largely support Emijah Smith) will dictate how the district swings, or if white voters’ (who largely support Chipalo Street) turnout edge will swing the 37th district. We’ll have a whole lot to learn about our politics after this year’s midterms. Vote!

Andrew Hong is a data science student at Stanford University and lifelong South End resident. He has worked as a campaign consultant, community organizer, and currently serves as statewide coordinator of Redistricting Justice for Washington, a coalition advocating fair redistricting for Communities of Color across Washington State. For inquiries, email AndMHong@gmail.com.

Previous Article ‘The Peripheral’ Review: Why It’s a Cautionary Tale About Technology 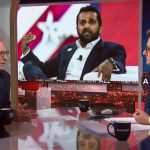 Murder in Moscow: The murky politics behind a political killing

There seems little doubt that the slaying in Moscow of right-wing, pro-war activist Daria Dugina was fallout from the Ukraine war, designed to create a […]

Political notes: How not to support the election deniers’ funders, campaign cash, and more

Rioters scale the walls of the U.S. Capitol on Jan. 6, 2021. Photo by Alex Kent for the Tennessee Lookout. With Black Friday approaching, a […]

Within 48 hours of its activation, The Florida Disaster Fund has raised more than $20 million in donations for the communities that experienced Hurricane Ian’s […]