James Corden is leaving late night. In Thursday night’s episode, “The Late Late Show” host said he will officially depart the show at the end of the 2023 season.

“This will be my last year hosting the show,” Corden told the audience. “When I started this journey, it was always going to be just that. It was going to be a journey, an adventure. I never saw it as my final destination, you know? And I never want this show to overstay its welcome in any way. I always want to love making it. And I really think in a year from now that will be a good time to move on and see what else might be out there. Okay?”

He said his last season will be full of fun, surprises and “many tears.”

“There will be so many tears. ‘Cause this has been the hardest decision I’ve ever had to make, it really has,” Corden added. “I’ve never taken this job for granted. Ever. Not once. And…  the fact that you watch us at home. Or you watch us online. Wherever you are, all over the world. The fact that we get to try and entertain you and spend time with you is an absolute privilege for me and every single person who makes this show. Here’s to the next 12 months and it’s going to be a blast, I promise you that.”

“We wish he could stay longer, but we are very proud he made CBS his American home and that this partnership will extend one more season on ‘The Late Late Show,'” Cheeks wrote.

When Corden takes his last curtain call next year, he will have hosted the show for eight and a half years. CBS has not yet announced who will take over when Corden leaves.

Corden made his debut as “The Late Late Show” host in 2015 and has since become a household name for his interview style and bold comedy. During his time with the talk show, segments like “Carpool Karaoke” and “Crosswalk the Musical” have taken off, even inspiring their own TV shows.

Before moving to Los Angeles to host, Corden was a comedian, singer and actor. He has starred in several major motion pictures, including “Into The Woods,” “Trolls” and “Peter Rabbit.” He was also a two-time host for both the Tony and Grammy Awards. Early in his career, he starred in two episodes of the popular British TV series “Doctor Who,” as Craig Owens, the father of a baby who affectionately nicknamed himself Stormageddon, Dark Lord of All.

Ben Winston, the executive producer of “The Late Late Show,” tweeted “the greatest job of our lives is coming to an end.”

“There has been no greater joy than going to work each day with my best mate and the most talented guy in the world,” he wrote.

“Congratulations, James, on what will be eight incredible years at CBS,” fellow comedian and late night host Stephen Colbert tweeted Thursday. “12:30 won’t be the same without you. But looking forward to your exciting adventures as the new Doctor Who!” 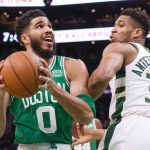 Country music star Naomi Judd died last week at the age of 76. Her daughters, Wynonna and Ashley Judd, said in a statement that they “lost […]

This is a continuing series of online activities to undertake on your computer or tablet, as well as local in-person events. Lectures & learning • […]

“In [mean] girl world, Halloween is the one night a girl can dress however they want and no one can say anything about it.” Channel […]

THE HAGUE, Netherlands (AP) — Dutch police on Wednesday released without charge two Belgians who were arrested a day earlier on suspicion of involvement in […]