Donald Trump’s inner circle had some choice words for the former president’s argument that the 2020 election was “stolen” from him through widespread fraud.

“Nuts,” said Trump White House lawyer Eric Herschmann during videotaped testimony at a House hearing Monday, recalling allegations that voting machines and ballots were being manipulated by forces in Germany, Italy and Venezuela.

“Detached from reality, if he really believes this stuff,” said Trump’s attorney general William Barr, who also employed the phrases “crazy stuff,” “idiotic,” “stupid,” and – “complete bull—” to describe the effort to convince the American public Trump was the true victor in the 2020 election.

Happy to be part of “Team Normal,” said Trump campaign manager Bill Stepien, whose taped testimony was shown in part at the second installment of hearings by the Jan. 6 committee investigating last year’s insurrection at the U.S. Capitol.

With a series of live witnesses and clips of videotaped testimony, the panel was on a mission to prove that Trump had been told repeatedly that he had indeed lost the election and that charges of voter fraud were not supported by evidence – and yet that he spread the lie anyway, raising many millions of dollars off of it.

Instead, the money didn’t go into any kind of election defense fund but to a variety of entities associated with Trump and his associates, including $204,857 to the Trump Hotel Collection.

“Not only was there ‘the big lie.’ There was also ‘the big rip-off,’” Lofgren said.

Monday’s hearing was the second of a series the panel is conducting to look into the events that preceded – and that panel members say provoked – the violent attack on the Capitol and the members of Congress who had gathered to certify Joe Biden as the duly elected president.

Monday, the panel delved into a very specific element of the allegations: that Trump knew – or at least had been told repeatedly by staff – that he had lost but lied for financial gain and the chance of being re-installed as commander in chief. That focus appeared aimed at showing Trump intended to mislead or defraud the nation.

It was “a scheme unprecedented in American history,” committee Chairman Bennie Thompson, Mississippi Democrat, said in opening remarks. “He lied to his supporters and the country. He tried to remain in office after the people voted him out.”

Attorney General Merrick Garland, who has been criticized by some Democrats for not being more aggressive in prosecuting highers-up in what many characterize as a scheme to overthrow the election, told reporters he was paying attention to the hearings.

One of the few members of Trump’s circle who supported the former president’s claims – indeed, egged him on – was former New York City Mayor and Trump lawyer Rudy Giuliani, whom two witnesses said was drunk on election night when Giuliani advised Trump to simply claim victory.

While advisers kept telling Trump on election night that many votes would take days to be counted, since mail-in votes in some states were not counted until after polls closed, “an apparently inebriated Rudy Giuliani,” at the White House for an election night party, told Trump to demand the count stop, Cheney said in her opening statement.

But the assessment was confirmed by an under-oath Jason Miller, a former Trump aide.

“The mayor was definitely intoxicated,” Miller said in videotaped testimony.

Other witnesses talked about getting pushback when they tried to convince Trump that there was no evidence of voter fraud, meaning Biden had indeed won.

Trump lawyer Alex Cannon, appearing in videotaped testimony, said he told both Vice President Mike Pence and Peter Navarro, Trump’s trade adviser, that it was not possible votes had been flipped on voting machines in Georgia, since a hand recount affirmed Biden’s win in the Peach State.

Navarro, Cannon said, accused him of being “an agent of the deep state” who was “working with (Trump cyber adviser) Chris Krebs against the president.”

The result? “I never took another phone call from Mr. Navarro,” Cannon said.

Those whose videotaped testimony was shown Monday did not, for the most part, publicly challenge Trump’s unsupported claims of fraud in the run-up to the insurrection. An exception was Barr, who gave an interview to the Associated Press weeks after the election saying there was no such evidence. Barr resigned before his term was finished.

Ivanka Trump has separated herself from her former president father in clips of her interviews, saying she accepted Barr’s assessment and that she did not think the race would be called on election night. But in January 2021, Ivanka Trump initially tweeted that the insurrectionists were “American patriots” – a tweet she later deleted.

In Monday’s hearings, however, former Trump team members let loose with their frustrations over a president who simply refused to hear evidence that he had lost.

Stepien, who pulled out of an in-person appearance at the last minute because his wife was in labor, said he told the president that mail-in votes would take time to count, something that was well-known ahead of the election, But “the president’s mind was made up,” Stepien said in videotaped testimony the committee aired.

Barr, also in video, described at length how he knocked down Trump’s claims that votes were trucked across state lines or “dumped” in heavily Democratic Detroit.

“Bogus and silly,” Barr said of Trump’s allegations. In detail, Barr said, he explained to Trump how votes were counted in different jurisdictions, but Trump remained angry and defiant.

“You must be saying this because you hate Trump. You hate Trump,” Barr said his former boss told him.

The committee also heard testimony from elections experts, including veteran GOP lawyer Ben Ginsberg and Al Schmidt, the former GOP city commissioner in Philadelphia, that there was no evidence of the voter fraud Trump alleged in his speeches and fundraising pitches.

Even after the insurrection, Trump was determined to continue the campaign to undermine the election with false claims of voter fraud, Herschmann told the panel. Herschmann, speaking on video, recalled a conversation he had with Trump’s personal attorney, John Eastman, who Herschmann said was pressuring him to keep trying to overturn the election.

“I said to him, ‘Are you out of your effin’ mind?’ I said I only want to hear two words coming out of your mouth from now on: orderly transition,” Herschmann said. 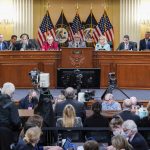 Next Article 6 takeaways from the second day of Jan. 6 hearings : NPR

Dick Gottfried on 52 Years in the State Assembly

Can federal parliament’s new women crossbenchers change politics, or will it change them?

When filming an interview with a politician it’s not normal for them to describe a hard-to-win part of their electorate as “the Badlands”.  Or to […]

Trump’s politics remain firmly rooted — and deeply influential — in almost every GOP race around the country, but the measure of his personal influence […]