The department also declined to prosecute Dan Scavino, who was deputy chief of staff, the DOJ officials said.

The decisions were a defeat for the House committee investigating the Capitol riot. After both Trump officials refused to honor the panel’s subpoenas, the committee found them in contempt of Congress and referred the cases to the U.S. attorney in Washington, D.C., for prosecution.

But even if prosecutors had charged them and obtained convictions, it would not have required them to cooperate with the committee. It would simply have punished them for their refusal.

A senior Justice Department official said the U.S. Attorney for the District of Columbia, Matthew Graves, notified the committee of its conclusions. The decisions were based “on the individual facts and circumstances of their alleged contempt,” according to the official.

Meadows was “uniquely situated to provide critical information about the events of January 6,” the committee said in seeking his cooperation, as well as efforts taken by public officials and private individuals to spread the false message of widespread fraud in the 2020 presidential election. He was “with or in the vicinity of” Trump when word of the riot at the Capitol reached the White House, it said.

The New York Times previously reported the department’s decision not to pursue charges against the two Trump officials.

The Justice Department did not explain in detail why prosecutors declined to charge Meadows. But unlike Steve Bannon, who was charged in November with contempt for refusing to cooperate with the committee, Meadows cooperated to some extent. He produced documents that he said were not protected by executive privilege and offered to testify to non-privileged matters.

Another factor may have been a long-standing view by the Justice Department that it would be unconstitutional to prosecute a former executive branch official who asserted executive privilege in good faith.

In finding Meadows in contempt, the committee said he refused to testify even about matters that were not privileged and that he had discussed in his book and television interviews. It also said he wrongly asserted executive privilege over matters that were not official government business, such as campaign-related conversations about the election results.

Reps. Bennie Thompson, D-Miss., and Liz Cheney, R-Wyo., who lead the House committee investigating the Capitol riot, questioned the Justice Department’s decision not to act on the referrals for Meadows and Scanvino.

“We find the decision to reward Mark Meadows and Dan Scavino for their continued attack on the rule of law puzzling,” they said in a statement Friday.

“We hope the Department provides greater clarity on this matter,” the lawmakers added. “As the Select Committee has argued in District Court, Mark Meadows’s claim that he is entitled to absolute immunity is not correct or justified based on the Department of Justice Office of Legal Counsel Memoranda. No one is above the law.”

Navarro, 72, was indicted by a federal grand jury Thursday after snubbing a subpoena from the House committee investigating Jan. 6 seeking testimony and documents.

Pete Williams is an NBC News correspondent who covers the Justice Department and the Supreme Court, based in Washington. 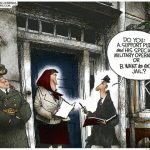 In the meeting, Bin Salman, also known as MBS, denied responsibility for the killing of Khashoggi at the kingdom’s Istanbul consulate. Biden said US intelligence […]

Stock futures fall as Alphabet and Microsoft drop after earnings

Stock futures were higher Tuesday morning after ending the day lower, snapping a two-day advance that started when a better-than-expected inflation report stoked hopes that […]