Lily Tomlin and Jane Fonda on “Grace and Frankie,” age and activism

In “Grace and Frankie,” Jane Fonda and Lily Tomlin are two feisty octogenarians who see old age not as a death sentence, but as a victory lap. In the show, the two women became friends only after their husbands (played by Martin Sheen and Sam Waterston) reveal that they’re in love with each other, and are getting married. Hilarity ensues, but the show’s humanity endures.

Fonda said, “We both have been told by women who have faced terrible things that watching ‘Grace and Frankie’ has kept their head above water, given them hope.”

Tomlin and Fonda actually are great friends in real life, but they’re not exactly like the women the play. For instance, Fonda doesn’t drink nearly as much as Grace.

“And here’s why: It’s because even with one drink, like, if I had a martini tonight, I would be at half-mast tomorrow,” Fonda replied. “Now, that wasn’t true when I was younger. But as you get older, I think alcohol affects you differently. And I only have so many tomorrows left. I don’t want to be at half-mast for any of them!”

“Grace and Frankie” premiered in 2015, and is now wrapping up its seventh and final season, making it the longest-running original series on Netflix ever.

To watch a trailer for the final episodes of “Grace and Frankie” click on the player below:

Smith asked, “Did either of you imagine starting out that at this point in your lives you would have a steady gig like this?”

Back in the ’70s, Tomlin’s road act was her widely acclaimed one-woman show, “Appearing Nightly.” When Fonda went to see it, she’d just started working on an idea for a movie that would become “9 to 5.”

Smith asked, “What did you think, watching Lily onstage?”

“I fell in love,” said Fonda. “I mean, I was blown away. And when I left the theater that night I said to myself, ‘I’m not making a movie about secretaries unless Lily Tomlin is in it.'”

And we know how that turned out. But you may not know that Tomlin quit after the first day of shooting; “I said just, ‘You have to let me out of the movie, you don’t have to pay me anything.’ I thought I was just awful. I said, ‘I’m just gonna ruin the movie.’ And then I saw the dailies from the second day – ’cause he couldn’t draw up the papers quickly enough – and so I thought, ‘Well, I’m pretty good, it’s okay now. I think I’ll just keep this part!'”

They’ve been friends since, together on set. And occasionally on the protest lines. In 2019 the pair, who both have a long history of social activism, were arrested together on the steps of the U.S. Capitol during a demonstration over climate change.

Turns out, Fonda started making her famed workout tapes to raise cash to support causes she believed in. She recalled: “I thought, ‘Well, maybe I should start a company that will fund what we’re trying to do.’ And I had a very smart friend who said, ‘Never go into a business that you don’t understand.’ But there was one thing I knew, which was exercise.”

She sold close to 17 million copies of her “feel the burn” tapes, and she gave most of her profits away.

In fact, she still does. “She does that, she gives all her money away,” Tomlin said. “I mean, [her] jacket: I’ve seen this at least ten times!”

Still, Fonda’s lifetime of exercise has had benefits beyond merely financial; at 84, she looks great. In fact, they both do.

Fonda said, “I’m super-conscious that I’m closer to death. And it doesn’t really bother me that much. What bothers me is that my body is, you know, basically not mine! My knees are not mine, my hips are not mine, my shoulder’s not mine. You’re looking at somebody who’s only me from here up.”

Truth is, what makes Jane and Lily (and “Grace and Frankie”) work is that, fake joints and all, they seem so very real.

“The fact is, if you’re alive and relatively healthy at an older – I mean, I’m almost 85,” Fonda said. “The fact that I’m still alive and working, wow, who cares if I don’t have my old joints? And I can’t ski or bike or run anymore? Enh. You know, you can be really old at 60, and you can be really young at 85. Health!”

“That’s beautifully put,” said Smith, who turned to Tomlin: “Why are you laughing?”

“I just like to hear her talk!” she replied. 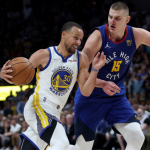 By JAKE COYLE, AP Film Writer NEW YORK (AP) — Some of the movies’ biggest stars barely speak a word of English, or any other […]

In the Marvel Cinematic Universe, the extraterrestrial Kree warrior, Captain Marvel, is caught in the crossfire of an intergalactic war. Despite her Kree heritage, Captain […]