FARGO — The 2022 political season in North Dakota just got enjoyable. Maybe not so much for Kelly Armstrong. But for the rest of the state’s residents and those who follow politics? Oh, yes.

Former Miss America Cara Mund announced on social media she will run as an independent for North Dakota’s lone seat in the U.S. House of Representatives

The election is three months away and until Mund dropped this bombshell Saturday, the state was headed to another snoozer election cycle. North Dakota is a glowing red state, the Democratic-NPL Party barely registers a pulse, and Republicans were going to waltz to victories in every statewide election.

That included Armstrong, who won his first bid for re-election in 2020 with nearly 70% of the vote. It’s likely Kelly’s weekend didn’t go as smoothly as planned after Mund made her announcement.

Don’t misunderstand. Even if Mund can gather the required 1,000 signatures (betcha $5 the North Dakota legislature changes the law to raise that figure significantly in its next session) and gets on the fall ballot, Armstrong is still a heavy favorite to easily retain his seat.

Heck, we don’t even know much of what Mund stands for, what her stances on issues are, whether she can raise money and who (if anybody) is backing her bid.

She has spoken publicly about her political aspirations. In 2018, Mund said she wanted to be the first female governor of North Dakota. She made some headlines in 2017 for speaking out against the U.S. leaving the Paris climate-change accords.

“I don’t really identify as a Democrat or Republican, but rather just as an American. I’m a person, not a party,” Mund was quoted as saying in 2017.

I don’t know Mund. Never met her. Never talked with her. Other than reading news articles about her, I don’t know much of anything about her.

Maybe making presumptions is dangerous. But from what I’ve read and after talking with a few people, I don’t believe her to be an ideological extremist.

She is, however, likely on the right side of the political spectrum, given that she interned in Republican U.S. Sen. John Hoeven’s office.

Everything in this column that follows is based on those presumptions.

At this early juncture there are reasons to believe the 28-year-old Bismarck Century graduate can attract a significant portion of the North Dakota electorate.

Her name ID is already high and that’s a huge advantage in politics. Most people have heard of North Dakota’s Miss America. Mund’s name ID might be higher than Armstrong’s, which polling has shown lags behind Hoeven’s, Republican U.S. Sen. Kevin Cramer’s and Republican Gov. Doug Burgum’s.

Mund is going to receive a pile of media attention, both statewide and nationally. It’s a great story — young woman, a former Miss America, returns to home state after graduating Harvard Law School and runs for political office against the establishment.

By all accounts, and obviously backed by her accomplishments, Mund is incredibly intelligent, driven, well-spoken, likable and focused. This run, so far as we can tell, is not some half-baked fringe wingnut running to get attention. Mund is legit.

If her beliefs are not extreme, running as an independent in this cycle is an advantage. Even in North Dakota, Land of Trump, there are Republicans tired of the right-wing wackadoodles in their party. And they are certainly fearful of what they see as the “socialist, commie Democrats” (eye roll). Maybe there’s a path for an independent, presumably moderate, presumably common-sense politician unaffiliated with either party.

There is something in the air politically in the country in the wake of the conservative U.S. Supreme Court killing Roe v. Wade. It will remain into the fall after what happened last week in Indiana, where the Republican legislature and governor passed a near-total ban on abortion in the state.

The recent overwhelming vote in deep-red Kansas to reject a proposed state constitutional amendment that said there was no right to an abortion in the state could be a harbinger of what’s to come. For the Kansas vote to go the way it did — 59% to 41% in favor of protecting abortion rights (Kansas voted for Trump over Joe Biden 56%-42% in 2020) — a good number of pro-Trump Republican women had to vote for it.

That’s important because if — and this is a massive “if” — Mund comes out in favor of protecting abortion rights, that differentiates her importantly from Armstrong and Haugen, two middle-aged men who are anti-abortion rights. Yes, the Democrat in this race is against abortion rights.

Mund could get votes from women, surely Democrat but more importantly Republican, who support the right to an abortion. Given the results in Kansas, there are clearly Republican women who are oh-so-quietly dismayed that abortion rights are being stripped away in America.

As of today, we don’t know where Mund stands on abortion or most other issues. If she comes out as anti-abortion, that advantage is eliminated. We’ll find out in due time.

In the meantime, enjoy Mund’s much-welcomed audacity. She’s made the sprint to November infinitely more interesting. And if you’re silly enough to dismiss out of hand this accomplished young woman’s bid, longshot as it might be, you should check your pulse. This is going to be fun. 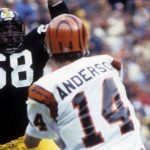 Previous Article Every NFL team’s best player who are not in the Hall of Fame: L.C. Greenwood, Ken Anderson headline list

Departing his small, unshowy home state of Delaware, Joe Biden roared into the sky aboard Air Force One, borne aloft by jet fuel and a […]

Barr was once seen as a facilitator of the then-President’s penchant for tearing at the limits of presidential power. But since Trump’s refusal to accept […]

Questions about creative district? Answers to be offered at Monday meeting | Politics