Miranda Lambert on writing sad songs: “You don’t have to be tortured to be good.”

Country superstar Miranda Lambert is the head of an empire that includes music, a Nashville restaurant, a western wear clothing line and more. She talks about her businesses, her marriage, and the release of her eighth solo album, “Palomino,” in a revealing interview with correspondent Lee Cowan for “CBS Sunday Morning,” to be broadcast  May 1 on CBS and streamed on Paramount+.

Lambert first made her mark with her 2005 studio album “Kerosene,” and has been one of country music’s biggest stars ever since.  In the past two months she was named the Entertainer of the Year at the Academy of Country Music Awards, and then won the Female Video of The Year honor at the CMT Awards.

Her music and her career have changed over time, she said.

“Ever since I started out, I was just a little left of center always, like, of whatever was kind of popular at the time,” she said. “I had my own style, and sometimes it didn’t fit in that lane that was the fast track a little bit. And I think it made my road longer at certain times in my career.”

Lambert said that each time she writes a song she tries to make it better than the last one. She also admits that when she started out, her music had an energy and feistiness, which has also been fine tuned.

“And I still have all of that, clearly, but I just don’t have to be as loud about it and do it as often, you know?” she said.

Lambert is the first female country singer to open a celebrity restaurant on lower Broadway in Nashville. She’s also created her own brand of western wear called Idyllwind (named after her first horse).

Lambert also talks with Cowan about her marriage to former NYPD officer Brendan McLoughlin, which caught everyone by surprise when it happened. “It’s like some kinda Hallmark movie or something,” Lambert said. “Like, this redneck from Texas meets this, like, beautiful NYPD officer on the street in New York. But it actually happened that way.”

McLoughlin inspired her 2019 hit “Settling Down,” and he was featured in the video. “It was a beautiful moment to share with my husband,” she said. “Sometimes artists live in darkness, and use it for their art or whatever … but you know, you don’t have to be tortured to be good. Like, you can write a sad song and not have to live every sad song you ever write, you know? It’s an impossible way to live.”

As for Lambert, she said she has changed, too. “I’ve also grown and I’ve learned a lot about myself,” she told Cowan. “I think at some point, you just start to settle into who you are. … I think that’s why you feel that, like, peace coming from me, ’cause I feel at peace with myself.”

To hear Miranda Lambert perform “I’ll Be Lovin’ You,” from her new album “Palomino,” click on the player below: 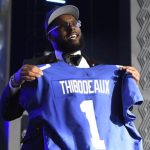 James Corden is leaving late night. In Thursday night’s episode, “The Late Late Show” host said he will officially depart the show at the end […]

After two fragmented seasons, the full Entertainment in the Park series returns this summer to St. Mary’s Park. The first offering is Thursday. “Our 2020 […]