LINCOLN — Nebraska school choice advocates expect lawmakers to push harder for such programs in the state after the U.S. Supreme Court determined the state of Maine could not prohibit tuition aid for religious schools while providing it for other private schools.

The ruling Tuesday will not directly alter policy in Nebraska, but officials on both sides of the school choice issue said it will almost assuredly factor into future legislative debates.

“While this ruling does not directly change Nebraska’s laws or school funding, it should embolden our legislature to finally pass legislation that will provide real choice in education to families and students in Nebraska,” said Nate Grasz, Nebraska Family Alliance’s policy director, in an email statement.

State Sen. Lou Ann Linehan of Elkhorn, who has repeatedly proposed legislation intended to help low-income students attend private or parochial schools, said the court’s ruling will make it harder for opponents to justify their position, though she believes passing legislation still won’t be easy.

States have taken different approaches to school choice, with some offering tuition vouchers for families who opt to send their children to private schools. Some states provide tax credits to donors who contribute to private school scholarship programs. As of March 2021, 16 states had voucher programs while 19 offered some kind of scholarship tax credit, according to the Education Commission of the States, a nonpartisan organization that researches education policy.

Nebraska does not have a voucher program, and recent attempts to establish a tax credit for scholarship donations have failed. The state does have an enrollment option program to allow students to attend public schools outside of their district.

“School choice is now the mainstream around the country, even if Nebraska remains backwards in this area,” said Tim McNeil, Archdiocese of Omaha chancellor, in an email statement. “It’s what families want and need.”

In Maine, the state allows families who live in towns that don’t have public schools to receive public tuition dollars to send their children to the school of their choosing. But the program has excluded religious schools. The nation’s high court ruled that policy violated the Constitution’s protections for religious freedoms.

Linehan said the Supreme Court ruling should eliminate the argument that including religious schools in choice programs violates the First Amendment. However, she said that has not been the leading argument opposing recent school choice bills in Nebraska.

Linehan’s effort this year was Legislative Bill 364, which would have provided tax breaks to people or businesses that donate to a qualifying private or parochial school scholarship fund. It died due to a filibuster, with one of the primary arguments against the bill being that it wouldn’t actually help low-income students — as it was intended to — but instead provide state funds to wealthy Nebraskans.

Jenni Benson, president of the Nebraska State Education Association, echoed that argument Tuesday. She said school choice programs are not a good use of tax dollars. She believes that money should primarily support public education, which is where 90% of Nebraska students receive their education.

Benson agreed that school choice legislation will likely return in future legislative sessions, as she said it is usually a topic that comes up every session. However, she said she also expects opponents will continue to “stand strong” against it.

Linehan said she plans to resurrect her scholarship tax credit bill in the next regular session, as she has been trying to get it passed for the last four years. She said she also expects other lawmakers will introduce their own school choice bills in the wake of the Supreme Court’s ruling.

“Over the last five years, school choice has gained major momentum in Nebraska and that momentum will only grow because of the (Supreme Court) decision,” McNeil said.

The fate of these bills will largely depend on the outcome of the upcoming elections in November. A total of 23 districts in the 49-member Legislature have contested races.

“Nothing is more important to people than their kids,” Linehan said.

World-Herald staff writer Joe Dejka contributed to this report, which includes material from the Associated Press. 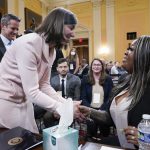 The Supreme Court Put Politics Above Law and Surrendered Its Legitimacy

According to a Gallup poll taken last month, public confidence in the Supreme Court has hit an all-time low. Just 25 percent of respondents had […]

‘I choose hope.’ Warnock’s memoir documents his path to politics

The power of the Senate is very extensive and consists of several specific areas. Here are some of those areas: Presidence of ceremonies, taking up […]