Many Nigerians have expressed displeasure about the rate at which electoral processes have been tied to the use of money and other values in recent times.

A cross-section of those who spoke with the News Agency of Nigeria (NAN) on Sunday expressed displeasure on the development.

Peter Kua, a businessman in Makurdi, Benue State, said that the way and manner money is used in politics has become very worrisome.

“People with questionable characters use money to buy their ways into various elective positions.

“It is very sad that the masses have been mortgaging their rights and the future of their children because of peanuts.

“We are encouraging these people who brandish or throw money at us to take advantage of our gullibility to further impoverish us,” Mr Kua said.

Also, Tersoo Ade, a taxi driver in Makurdi, appealed to the National Assembly for the interest of the nation to adopt direct primaries as the only mode of party primaries to check the influence of moneybags.

Mr Ade stressed that if direct primaries were adopted and enshrined in the Electoral Law, it would go a long way to save the Nigerian political system from total collapse.

Corroborating Mr Ade, Jacob Terwase lamented that if nothing was done about the ugly development, only money bags could win election in the country.

“Without money, one cannot make any meaningful move in any political party even if he was an angel because stakeholders always expect transportation fare whether they visited or the aspirants visited them.

“If something was not done about it, only the highest bidders will be picking parties tickets.

“My brother, money has destroyed our politics completely. Just see what happened during the last PDP primaries here in Makurdi where state House of Assembly aspirants were offering each delegate N1 million.

“We even have a situation where a House of Representatives aspirant was offering N1.5 million yet he still lost because his opponent offered more,” Mr Terwase said.

Another resident, Charity Tyolaha, said that for the country to produce a credible leader, serious efforts must be put in place to mitigate the use of money in politics.

Mrs Tyolaha also said that the direct form of primaries remained the best option and urged stakeholders to go for it.

She said that if direct primaries were adopted as the mode of primaries, many people in leadership positions would not be there.

The Campaign for Democracy, Human Rights Advocacy, Civil Society in Niger, therefore, called on the National Assembly to come up with stringent laws to discourage increasing money politics by politicians in the country.

Abdullahi Jabi, the chairman of the group, said: “The amended electoral law of 2022 is not strong enough to tackle the numerous corruption going on in our electoral system.

“Therefore, there is the need for the National Assembly to come up with stringent laws that will reduce the current huge amount of money that a politician must spend to win elective position.

“The same law must monitor the bank details and spending of political parties and their Aspirants/Candidates.”

Mr Jabi said that the measure would encourage responsible Nigerians who wish to serve the people to participate in politics.

He said that responsible Nigerians who want to serve the country have been denied the opportunity owing to their financial strength as a result of increased monetization of the polity.

“For instance, ordinary Nigerians can not afford to purchase expression of interest forms under their various political parties because money for such forms are on the high side, meant for the rich alone.

“Our politics still remain the exclusive rights of our politicians who have embezzled public funds and their families.

“These people still want to remain in power at all cost because they have converted our national treasury to their family business,” he said.

The group’s chairman described the ongoing party primary elections as a shame and disgrace to the country.

“Today delegates have become rich overnight because of money offered them by corrupt politicians, some of them get from N15 million to N20 million each.

“This is what is currently going on in the primary elections conducted so far, it is sad and not a good development for our country,” he said.

He enjoined Nigerians to stand against these group of politicians or they would continue to perpetuate themselves in power and plant other members of their families before leaving the scene.

In his view, Hamzat Lawal, the executive director, Connected Development, a civil society organisation, called on all anti-corruption agencies to scale up their games to check the rising money politics in Nigeria.

Mr Lawal, an anti-corruption activist and founder of Follow the Money, said the fact that “money politics is still playing precedent in Nigeria, it clearly signifies that the anti-corruption agencies are not doing enough.

“If the anti-corruption agencies are doing enough, people with money bags would have been scared to use money to entice or induce voters for their gains.

”If we must get it right, we must embrace our value system which has been eroded because we exchange our rights for a one-day meagre stipend and suffered in penury for the four or eight years the candidate will spend in office.

”It is really sad that money politics has taken its toll on the entire electioneering processes in Nigeria.

“Interestingly, the civil society organisations have deployed observers who are monitoring and documenting the entire process of the parties’ primaries and the forthcoming general elections.

“We shall in due cause make known our findings to the public including the international communities,” he said.

Nathaniel Abaniwo, the coordinator of Kogi NGO’s Network (KONGONET), said money politics has become endemic in Nigeria’s political system and is “not healthy for our political landscape and our economy.”

He blamed part of the problem on the failure of government at all levels to muster and imbibe the political will to reduce the cost of governance and ensure transparency, and accountability at all levels.

Mr Abaniwo called for adequate involvement of anti-graft agencies in proper monitoring of election process at all stages while ensuring the prosecution of erring politicians and the electorate.

She expressed regret that the very people or organs who should help checkmate the menace are deep into it and so only God can bring the change to save the suffering masses.

“My worry and pain is that it’s women like me and our youths, who form the larger population of voters are vulnerable to this game of money politics,” she said.

Olugbenga Ademola, a lawyer and politician, stressed the need for the government and the relevant stakeholders to redress the anomalies.

He warned, “if nothing drastic is done about this disturbing trend, only those with the cash to throw around to buy their way fraudulently into electoral offices in the 2023 general elections.

“There are still some loopholes needed to be addressed in the Electoral Act 2002, 2006 and 2010 such as Section 91(9) which states that no individual or other entity shall donate more than N1 million to any candidate.

“Also, Section 93(2)(b) gives political parties leverage to receive unlimited amounts above the threshold, which is contradictory.

”Each party is required to record and keep the name and address of any person or entity that contributes any money or assets which exceed N1 million.

“Some candidates latched on the lacuna to technically overshoot the limit by transferring the extra cash to their party.

“Other donors also took advantage of the provision to donate funds running into billions of Naira, on behalf of several unnamed friends.”

Mr Ademola noted that this is the time to de-emphasize money politics and push for a robust ‘human face’ party manifestoes that can proffer lasting solutions to the most pressing needs of the people.

He then enjoined INEC to rise to the occasion and prosecute anyone found wanting for infringing on political finance regulations to serve as a lesson to others.

Good journalism costs a lot of money. Yet only good journalism can ensure the possibility of a good society, an accountable democracy, and a transparent government.

For continued free access to the best investigative journalism in the country we ask you to consider making a modest support to this noble endeavour.

By contributing to PREMIUM TIMES, you are helping to sustain a journalism of relevance and ensuring it remains free and available to all.

TEXT AD: Why women cheat: what every Nigerian man should know 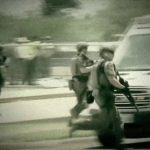 Next Article Uvalde funeral attendant who encountered gunman says he tried to go after shooter, was held back

Eastman Kodak: With The Politics Over, It’s Not Worth It (NYSE:KODK)

wellesenterprises/iStock Editorial via Getty Images Politics As I’ve discussed here before, a couple of times, there’s been a certain amount of political excitement concerning Eastman […]

Martin Shultz and Herb Paine have been around Arizona politics practically since statehood, or so it might seem. Often on opposite sides of partisan debates, […]

Democrats working through phases of disbelief, fury and pain on Friday vowed to fight back. But their mission, like that of their conservative vanquishers, could […]