The Omaha Public Library Board of Trustees will vote Thursday on the creation of an advisory committee that would make recommendations on future library operations, including the construction of a new main library.

The 10-member committee would be made up of city officials, library officials, the CEO of Do Space and a representative from Community Information Trust.

Do Space, which opened Nov. 7, 2015, has operated as one of the country’s first private digital libraries. Philanthropic fundraising group Heritage Omaha raised about $7 million to renovate a former bookstore into the current Do Space structure. Heritage then created a private nonprofit corporation, Community Information Trust, to run the operation.

Now, through a planning and community outreach effort led by Heritage, a high-tech library is on track to replace the Do Space building on the southwest corner of 72nd and Dodge Streets.

The committee would also define and recommend priorities for the new library and the overall public library system, including potential revisions to the “library’s mission, vision and values as determined through the Advisory Committee research, Library Strategic Plans and input from stakeholders,” according to the resolution.

Formation of the committee is dependent on approval by the Library Board, which will vote on the resolution during its public meeting Thursday.

“We’re having a committee of people with experience in many different areas,” said Mike Kennedy, president of the Omaha Public Library Board. “I think this committee is designed to tackle issues with their expertise.”

The resolution calls for the committee to regularly make reports and recommendations to the Library Board during construction of the new main library.

Once the new library is built, the committee would continue to make recommendations to the board at least quarterly.

With a total cost estimated to exceed $100 million, the new main library is still not a done deal. But stakeholders continue to push it toward reality.

Heritage Omaha, made up of some of the city’s biggest and most influential philanthropists, has pledged to raise the majority of the construction dollars if the project moves forward.

The city would pay $20 million toward construction costs, take ownership and then operate the library as part of its current library system. City officials say the city’s commitment to construction costs will be included as redevelopment bonds in Omaha’s 2024 and 2025 capital improvement plans.

A formal proposal detailing the planning and financing of the project is expected to go before the Omaha City Council in the coming months.

The new facility would replace the W. Dale Clark Library as the city’s main library.

The city is moving ahead with plans to demolish the downtown library later this year to make way for construction of Mutual of Omaha’s new office tower, a move that has sparked controversy. The city also is in the process of opening up a new downtown branch library at 14th and Jones Streets.

“This resolution is part of our continuing support for and commitment to our public libraries and the Central Library proposed by Heritage Services,” Omaha Mayor Jean Stothert said in a press release. “The advisory committee will bring our partners together to collaborate on recommendations to operate and activate our libraries with programs and resources that respond to the input we have received and anticipate future needs and expectations of our patrons.”

If plans move forward, the new library could open by 2025. 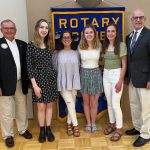 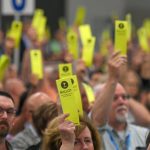 Voters often know little about the state comptroller, but Paul Rodriguez is working to make sure they know his name. Rodriguez, the Republican and Conservative […]

People queue to pay respects at Zojoji temple ahead of private funeral for assassinated former prime minister. Japanese have turned out in their hundreds to […]