The 2022 Platinum Jubilee celebrates Queen Elizabeth II‘s 70 years on the throne, with the monarch first taking on the royal title all the way back in 1952. However, Elizabeth wasn’t crowned until the next year at an elaborate coronation ceremony. Here’s all you need to know about the historic event.

When was Queen Elizabeth’s coronation?

Queen Elizabeth’s coronation took place on June 2, 1953, at Westminster Abbey in London, England. She was 26 years old at the time.

How long after King George’s death was Queen Elizabeth’s coronation?

After Elizabeth’s father, King George VI, passed away on February 6, 1952, Elizabeth acceded to the throne of England that same day, but she wasn’t coronated until about 16 months later.

Related: A Queen For the Ages! How Old Was Queen Elizabeth When She Took the Throne?

In Netflix’s biographical drama The Crown, one plot point at the beginning of the show portrays Sir Winston Churchill, played by John Lithgow, pushing Elizabeth (Claire Foy) to delay her coronation for political reasons.

While it appears that the actual coronation was delayed, this isn’t exactly true. Elizabeth was not officially coronated until 16 months after her father’s passing due to tradition regarding when celebrations should be held after a monarch’s death.

According to Royal Central, the 16 months allowed for the throne to plan the ceremony, while also waiting the appropriate amount of time to be respectful to the late King George VI.

What did Queen Elizabeth wear to her coronation?

Elizabeth had a special dress made by royal couturier Norman Hartnell for the event. According to the National Gallery of Australia, the dress was commissioned in October of 1952, and Hartnell offered the Queen eight designs until they ultimately worked together on a ninth and final design.

The dress featured many emblems representative of the United Kingdom at that point, including “the Tudor rose of England, the Scots thistle, the Welsh leek and the shamrock of Ireland, complemented by the wattle of Australia, the maple leaf of Canada, the New Zealand fern, South Africa’s protea, a pearly lotus flower for India, a second opalescent lotus flower for Ceylon and Pakistan’s wheat, cotton and jute.”

Elizabeth’s coronation dress was white, short-sleeved, and satin, while the robe that she wore during the ceremony was made of silk and velvet in purple, the historical color of royalty. At more than 6.5 meters long (about 21 feet), the robe was embroidered with olive branches and wheat ears with gold thread, as reported by Harper’s Bazaar. The entire ensemble will be on display at Windsor Castle in celebration of the Platinum Jubilee.

What was unique about Queen Elizabeth’s coronation?

One major feature of Elizabeth’s coronation that made it so revolutionary was the fact that it was the first coronation to be televised. According to Good Housekeeping, over 27 million people tuned in for the event. Churchill was one of the people against this, with the BBC reporting that he was particularly appalled at the idea of cameras being in the historical and religious site of Westminster Abbey.

While it can’t be said that Prince Philip planned Elizabeth’s entire coronation ceremony, he did have a hand in the event. According to Good Housekeeping, Elizabeth made Philip the chair of her coronation committee, and he was the one who first proposed that the event be televised.

Did Prince Philip kiss Queen Elizabeth at her coronation?

Yes, Prince Philip did kiss Queen Elizabeth at her coronation during the ceremony. The Daily Mail shared a clip of the encounter from the televised event, as Philip approaches a decked-out Elizabeth on her throne to pledge his loyalty to her, before giving her a short kiss. According to Express, this was definitely not scripted, and Philip was defying tradition with this action.

Next, learn all about Queen Elizabeth’s grandchildren! 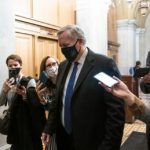 Previous Article CNN Exclusive: Republicans who texted Meadows with urgent pleas on January 6 say Trump could have stopped the violence

This 1903 Wurlitzer 125 Military Band Organ was designed originally to be played in skating rinks and carousels. It has 101 wooden and brass pipes […]

All the events in and around Omaha this November. A new art show at the Roberta and Bob Rogers Gallery explores the […]

In the Marvel Cinematic Universe, the extraterrestrial Kree warrior, Captain Marvel, is caught in the crossfire of an intergalactic war. Despite her Kree heritage, Captain […]