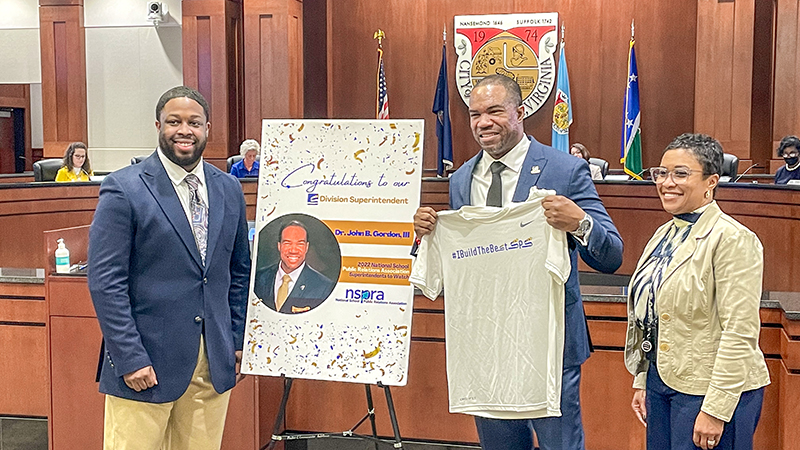 Chair Tyron D. Riddick, Superintendent Dr. John B. Gordon III, and Chief Academic Officer Dr. Okema S. Branch celebrate the major achievement for Gordon and SPS. Gordon joins a list of 24 nationwide superintendents who received the award for their impactful use of technology for the Suffolk School Community.

Suffolk Public Schools Superintendent Dr. John B. Gordon III was honored as a 2022 Superintendent to Watch from the National School Public Relations Association at the Jan. 12 School Board meeting.

Gordon joins a list of 24 nationwide superintendents who received the award for their impactful use of technology to inform and communicate with the school community.

“Dr. Gordon of course is a firm believer in nuance communication and under his leadership, SPS actually created its first social media specialist position at the administrative level,” Communications and Community Engagement Officer Anthonette Ward-Dickens said. “After it was done, we received inquiries from other districts on how it was done and to share the job description with them. So clearly, we’re making waves when it comes to updating nuance communication across Hampton Roads.”

“Thank you for your leadership and your service, your support of all of us, and especially our students,” Branch said.

The announcement was a surprise for the superintendent.

“You all really did surprise me with that one, I did not know that was coming,” Gordon said after receiving the award.

He thanked both Dickens and Branch for their hard work and noted that without their efforts, the recognition from the NSPRA would not have been possible.

“As I looked through the list once we had received the recognition, I saw current and former state superintendents, many others,” Gordon said. “This is the top of the line award in the communications field.” 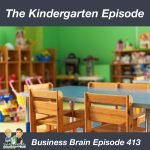 Next Article The Kindergarten Episode + Win a MacBook Air

When Barack Obama, the former US President said, “We are the first generation to feel the effect of climate change and the last generation who […]

ORLANDO, FL / ACCESSWIRE / October 31, 2022 / The pharmaceutical industry’s thought-leaders and innovators will be converging in Orlando, Florida for The 2022 ISPE […]

UK outfit Ratio Technology has built its entire business on modifying 10- or 11-speed SRAM DoubleTap road levers: first with a 1×12 conversion kit that […]