• Standing firm: “I always say nothing thickens your skin as quickly as working in Philly politics. You learn to become very tough and take everything with a grain of salt, to advocate for yourself, stand firm in your beliefs and ideals, and to not be shy about it.”

• On Philly: “This city, I get disappointed more and more each day. I’ve not had the privilege of growing up in the suburbs. Gun violence was always a concern for me.”

When Jemille Duncan applied for a Gates Scholarship last year, he kept his expectations low.

Sure, he’d served as an aide to two City Council members and a state senator by the time he was a high school senior, but Duncan didn’t know how he’d stack up against the 37,000 other applicants for the highly competitive scholarship that’s funded by the Bill and Melinda Gates Foundation.

“My friends have always been very encouraging — they’d say ‘What other 18-year-old has been writing laws for a city of 1.5 million people since they were 14?’” he said. “And I’d say, ‘Good point, but I don’t know everyone in the country.’ ”

So when Duncan — whose friends nicknamed him “Grandpop” because he “goes to sleep early” and doesn’t “listen to that loud-** music they play today” — learned via email that he was one of just 300 Gates Scholars this year, he did something completely out of character: He acted like a kid.

“I laid flat and just rolled on the floor,” he said.

“I was so proud of him,” she said. “Sometimes, I find myself just sitting in awe of him, crying.”

With a four-year career in Philly politics already under his belt at 18, very little fazes Duncan, a brilliant, confident, articulate teen who quotes everyone from John Adams to Johnnie Cochran; who cites Supreme Court decisions with ease; and who carries a hard copy of the Constitution at all times.

“This is a word I’ve never used with a teenager before, but Jemille has gravitas,” said State Sen. Sharif Street, who hired Duncan as an intern during his freshman year. “And Jemille has had gravitas since he was 14.”

On Tuesday, Duncan, of Nicetown, graduated second in his class from Multicultural Academy Charter School with a 4.24 GPA (he surpassed 4.0 by taking AP classes), coming in just behind his girlfriend, who got a 4.29.

This fall, Duncan, who was accepted at 13 schools, will attend Swarthmore College, where he received a full scholarship. He plans to study prelaw and become an appellate lawyer and law professor.

“People ask me all the time, do I want to be a politician?” he said. “No, I do not wish that stress on my life.”

The oldest of three brothers, Duncan showed a love of history and critical thinking at an early age. While other kids wanted toys for Christmas, he asked for history books, his mom said.

“He always got good grades but he was a challenger,” Duncan-Campbell said. “If you told him the color was orange, he was going to figure out if it was really orange or not.”

Duncan’s interest in politics stems from his fascination with the U.S. Supreme Court, the Constitution, and “the political process that flows from the authority the Constitution delegates.”

“I am as much of a political and legal nerd as one could be,” he said. “At one point, I was writing very long fake judicial decisions.”

But at the same time, Duncan was also contending with the unrelenting gun violence in Philly. On his 12th birthday, he witnessed a shooting on his way to the corner store.

“The shooter was three feet from my face. I was scared but thinking what I had to do in that moment to remove myself from that deadly situation,” he said. “No kid should ever have to endure that trauma, but that’s the reality of too many Philadelphians.”

After a chance meeting with Street at a school assembly in eighth grade, Duncan reached out and secured a policy internship in Street’s office for three years. He wrote 104 legislative analyses and four pieces of legislation, two of which passed.

“One of the things I fell in love with about this job immediately was the writing,” Duncan said. “I got to write about policy and share those opinions with people that mattered.”

During his time with City Council, Duncan has written 58 pieces of legislation, 28 of which have passed, including a bill to change the fine for sidewalk parking from $50 to $300 and a resolution authorizing hearings to investigate racial bias in development.

“It is very rare for someone so young to have such an extensive command of policy issues as well as an ability to develop sound, impactful legislation that has a high probability of Council-wide support and final passage,” Bass said. “When I was his age, I certainly didn’t have the skills to do what he seems to do so effortlessly.”

But being the youngest person in the room isn’t always easy for Duncan. Some have been threatened by a teenager doing the same job they are, and others underestimate his abilities.

“I’ve never seen anyone not underestimate Jemille because of his age,” Street said. “Some people get a rude awakening, but more likely, I see people pleased beyond expectations.”

He credits his work ethic to his mom, who had him as a teen and worked her way up to a manager position at McDonald’s to provide for her sons.

“Even when she didn’t explicitly say, ‘You’ve got to work hard to get what you want,’ she lived that and still lives that every day,” Duncan said.

And when his mom wanted to follow her dreams of becoming a pharmacist and dental assistant, Duncan was her biggest supporter, helping her with her schoolwork and resume.

Duncan’s top college choices were the University of Pennsylvania and Swarthmore College, both of which accepted his application. His decision to attend Swarthmore was sealed when he returned from a public safety event this year to find his block cordoned off by crime scene tape because a triple shooting happened near his house.

“I said, ‘I can’t be in the city anymore.’ Nothing happens at Swarthmore, so that’s where I’ll go,” Duncan said.

Since he already secured a full scholarship to Swarthmore before the Gates Scholarship came through, Duncan can use the latter to cover all additional costs, like technology, and he’s excited for the networking opportunities it provides, like an upcoming conference with fellow Gates Scholars in California.

And while Duncan’s colleagues are proud of him, nobody is more proud than his mom.

“I feel like part of my purpose in life was having him,” she said. “I feel like he’s the next generation of the youth that will have a positive impact.”

Know someone in the Philadelphia area whose story deserves to be told — or someone whose story you’d like to know? Send suggestions for We the People profiles to Stephanie Farr at sfarr@inquirer.com or call her at 215-854-4225. Send tips via Twitter to @FarFarrAway.

• Dominai Taylor is one of Philly’s first vaccine ambassadors.

• Check out more We the People here. 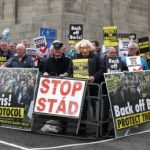 Tobago Cepep worker on firing: ‘This is politics’

The city of San Diego this week released numbers indicating that the city is not anywhere close to producing the 108,000 homes by 2029 that […]

How Politics Poisoned the Evangelical Church

“Before I turn to the Word,” the preacher announces, “I’m gonna do another diatribe.” “Go on!” one man yells. “Amen!” shouts a woman several pews […]