This Video Series Is Teaching Millennials and Gen Zs Politics

For a country that relies on its younger generations to create meaningful change, little effort is put into trying to speak those populations’ language.

Fair Fight, an organization led by political advisor and strategist Chelsey Hall—a Black millennial—is changing that. Hall hosts a YouTube video series, Civics for the Culture, in which she unpacks facts about everything from voting rights to the history of democracy, the tasks of the legislature, and the job of a governor.

Each video is filled with bright colors, visual cues, and lasts up to five minutes. And while the topics are heavy, Hall talks in a fun and easy way that young viewers can understand and relate to—something that politicians and campaigns often do not do.

Hall’s series was “birthed from sadness” following the racially-charged attacks on BIPOC communities and Asian-Americans in the U.S. during the last administration, amid the death of George Floyd and Breonna Taylor, and ahead of the history-making 2020 presidential election and Black Lives Matter movement. Each episode is connected to current events in the country, and is meant to help viewers decipher what exactly is going on in politics.

“In season 1 and season 2 we define what a General Assembly is and what a legislative session is, and really break down why it’s so important for us to pay attention to an attorney general and connecting the dots to things that we see currently—like the Brianna Taylor verdict,” she says.

This Juneteenth, Hall says that while it’s important to acknowledge the progress we have made as a country—much thanks to Millennials and Gen Zs who are finally challenging issues that have been holding us back for so long—we must also remember that we’re not yet at the finish line. And that goes for racial disparities, reproductive rights, and all of our so-called constitutionally-protected freedoms.

“In episode 5, it was really important to me to make sure people know the things we are experiencing and feeling aren’t new. And what better time to remind folks that the fight isn’t over than in the midst of Juneteenth?” Halls says. “And the fact that the promise of ‘life, liberty, and the pursuit of happiness,’ and ‘equality’ was not real for people that look like us—like me. It is always going to be a fight. Our history shows that there is progress but there are also setbacks, and there is no time for us to really be complacent because our democracy is so fragile.”

Hall’s mission from the start has been to find a way to engage the younger generations—especially BIPOC voters who often feel even more disconnected—with politics so that when it comes time to vote, they are able to make the decisions that could affect their lives.

“There’s so much misinformation around voting that sometimes it seems we are just trying to mitigate the harm,” Hall notes.

One way she has been able to engage young voters is by partnering with figures who they want to listen to, such as actresses Issa Rae and Keke Palmer, NBA stars Stephen Curry and LeBron James, and even Duchess of Sussex Meghan Markle.

“Campaigns and organizations I feel were not doing the proper work in connecting the dots,” Hall says. “And so we partner with all of these folks and media brands (Crooked Media, The Shade Room) to be able to step into the gaps for folks who are not following Fair Fight—they might not be following Stacey (Abrams) and hearing every word she has to say, but they will absolutely listen to Steph Curry, they will absolutely listen to Issa Rae.”

For season 3 of Civics for the Culture, which debuts in September, Hall is taking it up a notch by making each video under three minutes—”TikTok timing.”

“Civics for the Culture speaks to a group of folks who have not been authentically connected to. And I’m a part of the target audience, so I know what I want to see. I know I get my news from the Shade Room. I wake up every morning and I’m on TikTok. And that’s how a lot of folks operate,” Hall says. “We need to do this in a very intentional way.”

Ahead of the midterms in November, Hall says she hopes she is able to help more young voters of color “connect the dots” when it comes to their daily lives and the laws being made by politicians, and realize there really is “power in voting.”

“If we are able to truly teach civics at step one and continue to advance, we can fully understand where we were, where we have come, and what we still need to be doing to protect our democracy, because it is extremely fragile and it is the fabric of our country and how we access our freedoms,” Hall says.

This content is created and maintained by a third party, and imported onto this page to help users provide their email addresses. You may be able to find more information about this and similar content at piano.io Previous Article SA Police could use Adelaide city facial recognition technology, despite being asked not to 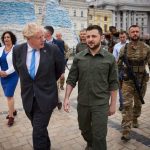 Donald Trump’s inner circle had some choice words for the former president’s argument that the 2020 election was “stolen” from him through widespread fraud. “Nuts,” […]

What’s in the bipartisan gun deal and what’s not

One of the biggest factors still to be sorted out in the framework agreement is how the legislation will be written. The announcement includes the […]