This is a developing story that will be updated.

The former president endorsed Miller in early January and appeared at a fundraiser she held at his Mar-A-Lago resort in April.

But Trump’s endorsement of Bailey was a new development, one the Xenia Republican has been openly seeking for months. The former president suggested in an interview with The Center Square earlier this week that Bailey would likely be his man if he did endorse.

On Saturday, he went further: “Darren is just the man to take on and defeat one of the worst governors in America, J.B. Pritzker.”

Trump described Bailey as a farmer, a fighter, “an outstanding warrior in the Illinois State Senate,” as well as “a fearless supporter of the Second Amendment and a tireless champion of religious liberty.”

He also took shots at Democratic Gov. J.B. Pritzker, who released a video criticizing the former president ahead of Trump’s visit.

Calling Pritzker “pathetic,” Trump criticized Pritzker’s response to the coronavirus pandemic and compared gun violence in Chicago to the military situation in Afghanistan during his presidency.

“Everybody’s fleeing your state. This is a disaster,” Trump said.

He told a story about meeting Bailey earlier in the day, saying Bailey yanked a hair out of the former president’s head after commenting that it was hanging across Trump’s face. “Which tells you a lot about Darren — there’s no games, right?”

Invited onstage to address the crowd himself, Bailey agreed: “I will not lie to anyone and I will not let anything go unnoticed.”

Trump’s in-district visit — held about 15 miles north of Quincy at the Adams County Fairgrounds — offers Miller a significant boost in the final stretch of the campaign.

“Mary is a warrior for our movement and our values,” Trump said, calling her a “fearless, America-first patriot.”

Miller and Davis have been locked in a heated incumbent-versus-incumbent primary contest, the result of a congressional redistricting process controlled by legislative Democrats and the state losing a district following the 2020 U.S. Census.

The new 15th is a sprawling district that stretches west to east across Central Illinois from the Iowa and Missouri state lines to the Indiana state line. It also includes some outlying portions of the Metro East region.

Though there have been some high-profile losses by Trump-endorsed candidates this cycle, most with the former president’s stamp of approval win their elections.

Miller, a freshman firebrand, is a member of the far-right House Freedom Caucus. Davis, a five-term incumbent who is in line to chair a committee if Republicans take the House majority, is a traditional conservative with a bipartisan streak.

Davis voted Trump’s position 89% of the time during the former president’s term in office. He also served as an honorary chair of Trump’s 2020 campaign. He even appeared with Trump at a rally in Southern Illinois in the waning days of the 2018 campaign.

But he had previously rescinded his support of Trump in 2016 following the release of the Access Hollywood tape in which the then-Republican nominee described sexually assaulting women. Davis has not said whether he voted for Trump that year or not.

Davis also voted to certify President Joe Biden’s electoral college victory and was among 35 Republicans who supported the creation of a 9/11-style independent commission to investigate the Jan. 6 attack on the Capitol.

That effort stalled in the Senate and Davis later voted against the creation of the Jan. 6 select committee.

Miller, on the other hand, supported Trump’s efforts to challenge the results of the 2020 election in several states.

Speaking to the crowd on Saturday, Miller said Davis “betrayed us.”

“My friends, this race is between MAGA and a RINO establishment member,” she said, using the acronyms for Trump slogan Make America Great Again and Republican in Name Only. “Don’t you miss President Trump?”

Davis is viewed as having the stronger political organization and as a more seasoned retail politician. He’s raised more money, though spending from outside groups on Miller’s behalf has evened the playing field.

Miller, on the other hand, has Trump. Her campaign has been more low-profile, shunning local media and being less visible on the trail in hopes that the former president’s backing will be enough to get her across the finish line.

Her campaign has been bogged down by controversies, such as a campaign volunteer who drove her around to campaign events who was convicted of during a child for sex in 2005.

However, she appears to have momentum in the campaign’s final days.

According to a poll from McHenry-based Victory Geek published in The Illinoize last week, Davis leads Miller 38%-35% with 27% undecided. However, when voters were told of Trump’s endorsement, Miller leads 47% to 39%.

Trump’s visit will be another test of the former president’s hold over his party, especially in a deep-red district where his popularity is still high.

Hundreds of Trump supporters arrived early to ensure a spot at the event. It had the festive feel of a college tailgate at times, except team attire was replaced with “Make America Great Again” hats and Trump flags.

The crowd included both supporters of Miller and people who traveled from outside of the 15th Congressional District to see the former president.

“She’s going to fight for everything that I would fight for,” said Nikki Buehler of Camp Point, who described Miller as “one of us.”

Buehler, 42, said she had concerns that Davis was not a true conservative. She thought Trump’s appearance would help her preferred candidate gain more momentum heading into Election Day.

“A lot of people will rally behind him and what he stands for, knowing that that’s the president they most liked and most think alike to,” she said. “His values line up with ours.”

Doug Rowe and his wife Merry Higgin, who woke up at 7 a.m. and drove four hours from Marengo in McHenry County.

“We’ve watched all his rallies; big supporters,” said Rowe, 65. “(This is) the first opportunity we’ve had to come see him.”

Speaking before Trump’s remarks, Rowe was interested to learn whether the former president would endorse a GOP gubernatorial candidate — something he said would be the deciding factor in earning his vote.

Without a confirmed endorsement, Rowe said he was leaning toward voting for Bailey. “I think he’s the most closely aligned with Trump,” Rowe said. “My values are aligned with the president’s.” 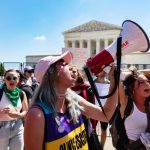 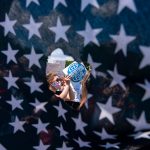 Selena Gomez joins Biden for a conversation on mental health

“I don’t take my platform lightly. I’m not perfect, I’m human. I have things that I walk through. That’s why I feel like people like […]

Do US Jews Care About Israeli Politics as Much as the State Itself?

Jews living in the United States profess a strong sense of care toward Israel, but are they as deeply invested in Israeli politics? According to […]